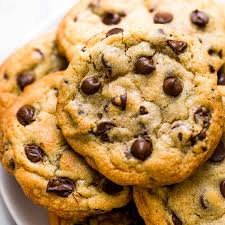 In 1938, Ruth Graves Wakefield was working in the kitchen of the Toll House Inn in Whitman, Massachusetts.

While baking cookies, she ran out of bakers chocolate.

But, it didn’t melt into the dough.

Those cookies had chunks of unmelted chocolate in them.

Probably because they smelled so good, those “mistakes” were sampled and folks liked them.

Chocolate chip cookies are the world’s favorites and over 7 billion are eaten yearly and almost half of them are homemade.

Immaculate Baking even made a 40,000 pound chocolate chip cookie.

That would require a tanker truck of milk to dunk in.

Bottom line is, however, chocolate chip cookies were a mistake.

Penicillin was another accident.

Sir Alexander Fleming, in a rush to go on vacation, left stacks of dirty petri dishes in his work area.

When he returned home, he noticed a petri dish covered with staphylococcus had some mold growing on it and the bacteria seemed to be avoiding the moldy spot.

If he had a good maid, we might all still be sick today had she cleaned up while Mr. Fleming was away.

In 1922, a somewhat clumsy dietitian at Washburn Crosby Company was preparing some wheat gruel and accidentally splashed some of the muck on the hot stove top.

It immediately turned into flakes.

Now the cook tasted the flakes and thought it was better than the gruel. He took it to the company board and after 36 different versions were created, they found one where the flakes wouldn’t crumble in a box.

The company held an employee contest to name the new food.

Beating out “Nukeys” and “Gold Medal Wheat Flakes” came the “Breakfast of Champions” or Wheaties.

Ever use a Post-it-Note?

In 1968, a 3M Company scientist came up with a very weak adhesive while attempting to create a super-strong one.

He didn’t see much use for it.

However, another 3M scientist realized little pieces of paper with that weak adhesive on it made great book marks in the church hymnal.

That’s how a nice money-maker for 3M came about.

How about potato chips?

In 1853, a New York restaurant customer complained to the waiter that the fried potatoes being served were “too soggy and thick”.

The customer kept sending the the offering back to the kitchen.

A disgruntled chef sliced some taters very thin, fried them and added lots of salt and that’s how potato chips came about.

No word on how the unhappy customer tipped for that meal.

Let me tell you about Silly Putty.

A General Electric engineer during WWII was looking for a way to get around the worldwide rubber shortage.

Thinking he could make a rubber substitute out of silicon, he added boric acid to some silicon oil.

He wound up with a gooey mess that bounced but they really couldn’t find any military use for it.

Had they spread it out on a colored comics page and lifted it up, they would’ve found one of my favorite uses for Silly Putty.

Then there was the Raytheon engineer that was working on radar-related research with a new vacuum tube.

Ho noted the candy bar in his pocket had started to melt.

Some experimentation was done with popcorn and when it popped, this engineer filed a patent in 1945 for his “metal cooking box”.

There was another 3M chemist looking to develop a rubber material that would not deteriorate when exposed to jet fuels.

She dropped some of the mixture on her show.

Over time, when the rest of the shoe became dirty and stained, that spot with the drop was bright and clean.

The chemist retraced her steps and found the stain-resistant compound we call Scotchgard.

In 1943,  naval engineer was working on sensitive springs to keep fragile equipment secure on ships.

One of these springs was knocked off a shelf and it sorta slithered along the flook.

The engineer took this spring home, showed it to his wife and she wisely said, “I think you might have a toy there.”

They picked a Swedish term for “sleek and sinuous” and the “Tickle Me Elmo” of 1945 was born…The Slinky.

Even chewing gum was discovered by an American inventor who was trying to turn chicle into rubber.

Now, we pop the stuff in our mouths and when we’re done chewing, we stick it beneath restaurant tables or on the walls while waiting at a drive-thru.

Some even toss it in the parking lot so I can step on it after the sun has made iot ultra-gooey.

Al of the aforementioned items and events were mistakes.

But as Charles Kettering said, “An inventor fails 999 times, and if he succeeds once, he’s in. He treats his failures as practice shots.”

The most prolific score in NHL history, Wayne Gretzy says, “You miss 100% of the shots you never take.”

Water Displacement and the 40 pays homage to the 39 previous formulas that weren’t correct.