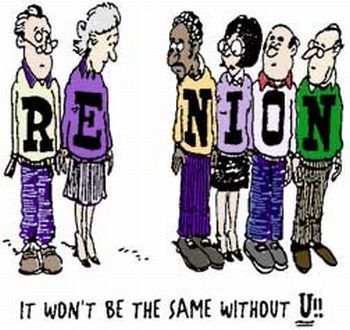 She didn’t graduate from that school.

She lived in that area and attended school there until her junior year when her family moved to Mansfield, OH.

That’s where I grew up and attended Madison High School.

That’s how we met.

The Triway Titan crowd always invites Neav back to reunions.

I think that’s because many of her long-time friends are still there.

She must be a “Titan in abstentia”.

When she got the invite for the 50th, her old friend Bonnie hooked up with her and suggested Neav stay with her and they could go together.

I told her I thought it was a great idea.

I went with Neav to an earlier reunion and didn’t know most of the folks but they had drinks that I could sip while she chatted and giggled.

Nothing wrong with drinking while your wife babbles.

But that was just a dinner and dance affairs while the 50th had activities spread over several days and nights, so off she went to hang with her old “buds”.

We both attended the 10th reunion for Madison High School and it was actually the event that led me to change professions for awhile.

But that’s another story for another time.

Madison’s 50th was just before the Triway event but I never really thought about attending it.

I connect via Facebook with a number of folks I went to school with but I just had no desire to see how old we’ve all gotten, who’s lost their hair, or colors it, etc.

Still, I saw a posting by a classmate listing the names of the members of the Class of ’68 who have passed on.

I knew quite a few of them.

Most I hadn’t realized they had died.

But it did get me thinking about some of my childhood pals that I used to hang with in the Mansfield area.

There was Alan Berry who had younger twin brothers Ronald and Donald and a smaller brother named Clyde.

Why do I remember that?

In the winter, we built slalom runs in the snow south of the Berry’s garage.

We scrounged up a couple of those oval, rubber change purses that you had to squeeze to get access to your coins.

We put a lead fishing sinker at one end and packed it in with Play-Doh.

Then we enlisted a kneeling or crouching olive-green plastic soldier and squeezed him into the purse, opposite the sinker.

A little lubrication on the underside of the change purse and you had a nifty little homemade luge to race down the trail.

In the summer months, we’d building plastic model cars and race them downhill on our dirt track back in the “woods”.

One of us came up with the idea of  racing “under the lights” at night,  so we soaked cattails in kerosene and lit them. It was a smoky mess but we could see the action.

It probably isn’t as cool as most of today’s video games but it kept us occupied and out of serious trouble.

Later, Alan played bass in our group,  The Tempests, and our first paying gig was at a meeting of the Sisters of the Knights of Pythias.

We were stylin’ in our short-sleeved white shirts with black turtle-neck dickies.

There was Pete Gottschling.

He’s the only guy I ever got in a fight with.

It was during a sandlot football game in Eastview and I think he took exception to one of my grinding gridiron blocks.

There was some rolling around on the ground but I don’t recall any punches being thrown.

Pete and I used to go to Sandy Hill in the fall to get really inexpensive apple cider to drink, despite the admonitions of his dad, Pete.

Lon Gardner lived up the street on Crestwood Drive and his dog, Smokey chased Alan Berry riding by on his bike and bit him.

Lon had an older brother Duane who I hit in the back of the head with a green apple tossed from the far side of their backyard.

He would’ve killed me if he could’ve caught me.

Lon’s Mom, Jeanne had a big dinner bell she would ring when she wanted the boys to come home.

You could hear it all over the neighborhood.

He was part of the crew that built a lean-to next to a big hickory nut tree at the edge of the field where we used to play sandlot baseball.

We “borrowed” rolls of tar paper and roofing nails to waterproof the roof and filled the floor with wispy, dried grass from a nearby field.

It served as a sleep out location a number of times.

Vaughn Mullet moved to Eastview later and one day we piled into his black Falcon after playing tennis at Liberty Park.

It was one of those steamy, hot mid-summer days.

One of us came up with the idea to wind all the windows up, drive home with the heat on so it would feel cool when we got home and exited the car.

For a brief,  few moments.

It’s a wonder we didn’t have heat exhaustion.

Okay, so I didn’t make the reunion.

But I did just renew some old memories by writing this.