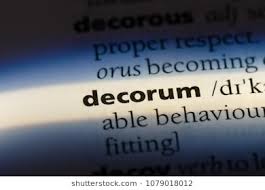 For sometime, it’s been obvious that the playing field has been changing.

Folks on both sides of matters bemoan the fact that no one wants to discuss issues anymore.

I think an old word of Latin origin explains the problem.

The word is “decorum”.

In the early 1800’s the word “decorum” was mentioned often but it has been in steady decline of usage through today.

a) my opponent played better than I did or

b) I had too many unforced errors and mistakes.

And, even though I lettered two years in varsity tennis, I believe it was because I knew which end of the racket to hold.

In those days, my school was not a tennis powerhouse.

Serena Williams has been one of my favorite tennis players but her behavior showed little decorum.

I doubt Serena was upset because she couldn’t pay the rent if she didn’t win; her net worth is in the neighborhood of $180 million.

And, what should have been a moment in the sun for Ms Osaka turned out to be an afterthought in the shadow of Serena’s snit.

I was a big fan of Arthur Ashe and as much of a competitor as he was, I don’t have memories of him berating umpires or breaking rackets.

I didn’t watch him at all of his matches but he seemed to exhibit a degree of cool even when things didn’t go his way.

But today, it seems more of us think the best way to get a point across is to yell the loudest.

Make the most noise.

Lots of my classmates thought the best way to affect change was to burn a bra, a draft card, let their hair and beards grow long and to carry signs or throw rocks.

I thought the best way to change things was to cut my hair, shine my shoes, wear a tie so the people running things would at least listen to me when I got on their committees and boards.

I became a sort of chameleon, hoping to be heard before they noticed I was just one of those 60’s hippies.

The group Chicago reminded students in their song, “Dialogue”, what the challenge really was.

“Will you try to change things with the power that you have; the power of a million new ideas?”

I have to admit that I still get tickled when people will ask me, “Well John, what do you think?” or “What is your opinion?”

I may not agree with you but I am willing to listen to you provided you extend me the same courtesy.

Years ago, I was confronted by a buffoon at a meeting.

After repeated attempts to make my point or offer my opinion, I simply said, “Sir, my sense of fair play prevents me from getting into a battle of wits with an unarmed party!”

While he considered my comment, I walked away amid the sound of chuckles and clearing throats.

I feel some folks confuse “decorum” with being a wienie or soft.

But “decorum” was nothing to do with removing the center of an apple.

This “decorum” is just a proper and decent way to address things.

But it’s not popular to practice decorum.

We have to be in somebody’s face.

If you’re not confrontational and even rude, you’re a pushover.

When did passion for an opinion or cause become a simple shouting match?

The loudest one wins?

Okay, we were always told, “The squeaking wheel gets the grease”.

But too much grease makes the  way slippery and no one ends up getting anywhere.

Don’t confuse that with being weak.

So maybe the answer to all of today’s uproar is for everyone to take a big “chill pill”.

If you keep doing the same thing over and over, expecting different results, that’s called insanity.

Seems to me we’ve tried this current “thing” for more than a few days and has anything really changed?

However, I’m convinced that sometimes you have to drag people,  screaming,  into the future.

Like sheep left alone in a pasture, left to their own means, they will eat all the grass and eventually die.

So the shepherd comes along with his crook and annoying dog, moves the bleating and complaining ewes and lambs to a new pasture.

Once there, the sheep munch on the new grass and say, “It’s a good thing we thought about moving!”

The paradox of leadership.

But lead with a little decorum, okay?