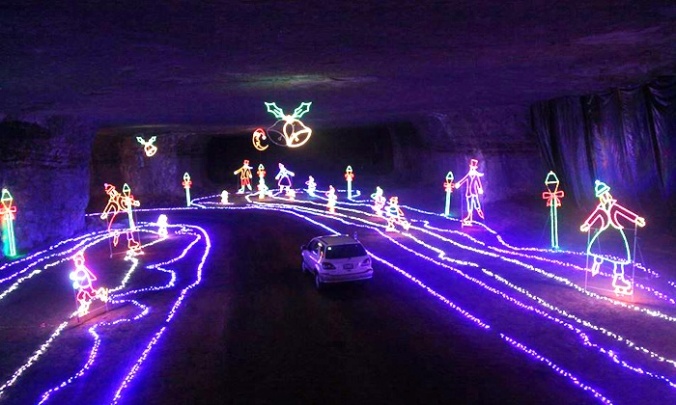 Prior to our family making a trip to the Louisville Mega Caverns, we had to buy a vehicle pass for the drive-through Christmas light experience.

Now, the real danger doesn’t come from the drive-through Christmas light  part of the experience.

(Navigating I-65 to Louisville is probably the riskiest portion of the activity).

The waiver also covers using the ziplines, skybridges, walkways, underground bike park and the challenge course that are part of the “Mega Cavern” offering.

In other words, it ain’t their problem if you get stupid!

I was in the Air Force, so I’m used to flying over things and not going underground.

Living most of my life in the midwest has made me aware of the New Madrid seismic zone which roughly runs from northwest of Memphis, Tennessee to southern Illinois.

While we’re not in quake-prone southern California, this fault line could make things quite adventurous in this highly-populated portion of the country when it decides to move again.

The last time was December 16th, 1811 when a quake there caused church bells to ring in Boston and there were reports the Mississippi River changed it’s course for a time.

I would say the odds f that happening while I’m in the Louisville  Mega Caverns is not likely but I suppose there would be better places to be in should a rumble occur.

The real topic is the waiver I had to sign.

It is the latest in a number of such agreements I’ve put my “John Hancock” on over the years.

Whenever the radio stations needed someone to perform a stupid stunt, my hand always went up.

Typically, I had to sign a waiver pardoning the event organizer iin case I did something stupid, like injure myself.

Before I took part in an elephant race, I had to sign a waiver.

I sat on his back behind his ears, holding a heavy rope necklace while the trainer “motivated” him to gallop a short distance.

The sensation was similar to sitting on a huge bag of moving potatoes.

I signed a waiver before grappling with Viktor the Wrassling Bear.

It was the only time I actually experienced any pain because Victor attemped to turn my left arm into a pretzel when he pinned  me.

My dear Mother-in-law would tell me to rub some “Joe Namath” on it.

Prior to doing a bunjee jump at a Monroeville, OH Harley-Davidson dealer I had to excuse anyone from legal responsibilty if I splattered on the parking lot.

They only had a piece of green indoor-outdoor carpeting below me which I assumed they would simply roll up and toss in a dumpster if things didn’t go well.

I must tell you, though, the sensation of free-falling was intense, especially as I saw the ground drawing near after my head-first dive.

Then suddenly, I was snapped skyward by the bungee cords I was attached to.

My legs were pure rubber when they unhooked me from the harness.

It required a waiver signing before I could take a flight in the old Red Baron Pizza promotional biplane.

The mustachioed pilot, complete with leather jacket and scarf asked  me, “Do you want the nice, easy flight or do you want the real man experience?”

If you have any testosterone, you know what the answer is going to be.

We did barrel rolls and dead stalls and twists and flips in that open-cockpit plane and it was incredible.

I signed another waiver before I took a ride in a two-seated dragster at the Norwalk (OH) Raceway Park.

I was strapped in better than I was in the cargo bay of a C141 mail plane I rode home in from Greenland.

When the driver put the petal to the metal, I experienced a few “G-s”and thought the end of that quarter-mile course came pretty quick.

I even had to sign a waiver before I took part in  a George Washington Day pie-eating contest.

(Guess they wanted protection from missed cherry pits or public wretching and gagging).

Remember the scene from the movie, “Stand By Me”?

I think I even had to sign a waiver when I did a 24 hour sleepout for the homeless while staying on a heated waterbed.

I suppose the waterbed company thought a frost-covered cadaver in front of their store would be bad enough for business without the next-of-kin suing them for damages.

There have been other waiver-signings but those are some of the more noteworthy.

Not sure how much real risk I was experiencing but I’m still here today.