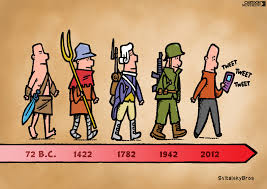 A friend of mine who teaches history suggested each of us should should be writing about our experiences these days.

When people live through challenging times, they need to remember that in just a very short period of time, there will be many people living who will have no idea about COVID-19, the coronavirus, the Wuhan flu, face masks and social distancing.

It will be the information that we leave behind as individuals and as a society that will provide the material used by writers of history.

American author David Gaud McCullough said, “History is who we are and why we are the way we are.”

History; the study of past events, particularly in human affairs.

Merriam-Webster describes it as a “chronological  record of significant events (such as those affecting a nation or institution) often including an explanation of their causes.”

The Cambridge Dictionary defines history as “(the study of or a record of) past events considered together, especially events of a particular period, country or subject.”

If I chose 20 people to record today’s events, my guess is we’d have almost as many different looks at what was happening in 2020.

Much like the Biblical Gospels, Matthew, Mark, Luke and John were all observing the same basic time and events but they offer different perspectives and views.

Abraham Lincoln said we can complain because rose bushes have thorns or we can rejoice because thorn bushes have roses.

History regarding World War II is recalled quite differently from the American perspective when compared with that of Germany or Japan.

There’s an effort in some communities to lessen or eliminate parts of our past by tearing down statues and memorials.

One of the more often-quoted lines regarding history is from George Santayana, paraphrased by Winston Churchill in a speech to the House of Commons.”Those who fail to learn from history are doomed to repeat it.”

But German philosopher Georg Wilhelm Hegel told us, “History teaches us that it taught us nothing.”

Marwick was a left wing social  and cultural historian but was critical of Marxism.

He analyzed, at length, different types of historical evidence, distinguishing between “facts” and sources, primary and secondary sources and different varieties of  primary source.

So, the idea that we should each be tracking this “living history lesson” of ours carries weight.

Marwick also distinguished between “witting” and “unwitting” testimony; that is, between the overt and intentional message of a document or source and the unintentional evidence that it also contains.

That might render the Dr. Martin Luther King, Jr. quote about history moot.

“We are not makers of history. We are made by history.”

In my opinion, that has a “Which came first; the chicken or the egg?” feel to it.

But both points are valid.

What each one of us write or remember is valid but it might be “flavored” by other activities or actions going on at the same time.

Since last spring when this pandemic moved front and center, more than half of my weekly writings have been based on observations and thoughts I’ve had.

They’re not necessarily right or without bias but they are my thoughts and recollections based on the events happening right then.

Which brings up an interesting thought.

What will historians write about 2020?

Will it be from the perspective of someone hacked off about a face mask mandate and social distancing or from someone who lost 2 family members to the virus?

If you don’t keep a journal, I might suggest that you would find it therapeutic.

I kept a journal while my son-in-law was in Iraq with his National Guard unit.

I don’t know if anyone else in the family ever read it but it contains snippets of what life was like in 2009 for this family.

I called it “Operation IRBY” (Is Ryan Back Yet?)

I also kept a diary while I was stationed with the USAF in Greenland way back in the 70’s. If nothing else, family members might have their memories jogged by my musings.

I’m glad I spent the time to record my thoughts.

Jamaican publisher Marcus Garvey said, “A people without knowledge of their past history is like a tree with no roots.”

My Mother-in-law, Martha, kept a daily journal for years.

They’re loaded with her malaprops and “Martha-isms” that told as much about her as the events she recorded.

Now I know writing is antiquated but with technology advancing as  fast as it is these days, recording your thoughts by electronic means might make them difficult to access and share.

But, with cursive writing not being taught my many schools these days, some of my long-hand diaries might as well be hieroglyphics to some youthful readers today.

I encourage you write down your thoughts.

Mark Twain said, “History may not repeat itself but it sure does rhyme.”