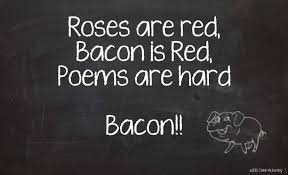 People for the Ethical Treatment of Animals (PETA) suggest we stop using phrases considered to be “anti-animal”.

Since we’ve learned these days that words matter, there’s a great social injustice being done to our animal friends.

They say phrases  which involve critters should be made more animal friendly.

We need to stop saying “beat a dead horse” and replace it with “feed a fed horse”.

First of all, I’ve never beaten a dead horse much less a live one.

I heard a story about my late Father-in-law kicking a dead groundhog as he walked along the road many years ago on his way home from school.

The bloated carcass virtually exploded and it forced him to take a  dip in a nearby creek to deal with the aromatic remains he was covered in.

Now I must confess to cutting the tail off of a a dead squirrel I found along the road.

I thought it would look cool hanging from the back of my hat.

Until it started to smell and the fur fell off leaving a leathery string with stubble.

But I never beat a dead horse.

However, feeding a fed horse seems like a waste of time for both me and the horse.

My Mother-in-law  used to toss stale bread in the backyard “for the birds”.

I always thought that might attract other undesireable critters to the yard.

Later I heard the materials in the bread might cause internal problems for our fine-feathered friends.

But I guess PETA has determined scones to be “bird-friendly.”

Someone poked fun at that by saying “bringing home the bagels”  was insensitive language “to the homeless and those with non-celiac gluten intolerance”.

Given the choice to opt for bacon or bagels, I pick bacon.

Whoever heard of a bagel, lettuce and tomato sandwich?

The basic breakfast meal of eggs and bacon tells another story about the amount of effort extended for the cause or project.

The hen is involved but the pig is committed.

But PETA says we should no longer “take the bull by the horns”.

It should be “take the flower by the thorns”.

Are we going to replace replace the running of the bulls in Pamplona with a garden-pruning contest?

(Although I did like the GEICO commercial with the running of the bulldogs.)

Instead of “being a guinea pig”, PETA wishes we would “be the test tube”.

I think I’d rather be a petri dish.

However, guinea pigs are cuter and boy! Can they whistle!

We should probably quit working so hard and drop out of the “rat race”.

(I heard the rats were winning anyway.)

What are we going to call it when someone picks on you in school?

“Bullying” might be offensive to those big, male cows.

Lest we think cats are slovenly, we should probably stop “cat-napping”.

Winged mammals might be offended when we say our crazy, old aunt has “bats in the belfry.”

Just because we’re not speeding along, is it in poor taste to say we’re moving at a “snail’s pace?”

Will it be socially-unacceptable to describe that unruly hair on the top of our heads, at the whorl, as a “cow lick?”

Did you ever see cow lick anything?

If a swipe of that tongue couldn’t get unruly hair under control, nothing could.

I never did understand how we used to say “croaked” when someone passed away but I should probably check with my bullfrog buddies regarding that.

Maybe it would be easier to take a “tad-poll”.

Did anyone check with the  work animals in the barnyard to see if they minded us tossing their footwear around?

Maybe we should be tossing old sneakers instead.

Hey, tie the laces and if you can get one of those loops over the stake, that’s the ultimate “ringer”.

We could call it a “looper” and you’d win.

That would add extra meaning to the phrase “thrown for a loop”.

What about those sleezy, shifty characters that we call “snakes in the grass?”

That probably puts all the fine, upstanding slitherers in a bad light.

I think we still have a “thing” with snakes and it goes back to that apple in the garden with Adam and Eve.

We often refer to someone who’s less than confident or somewhat shy as being “sheepish”.

Is that anti-animal talk?

I agree we shouldn’t be kicking dead horses.

At least kick a live one so it has the chance to kick back.

Perhaps, we shouldn’t bring home the bacon, either.

But what is my daughter going to put on the top of her delicious baked beans now?

You need to find something else to bring home and make your point.