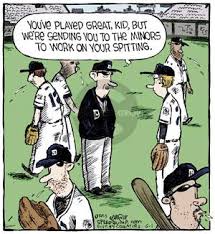 Watching a football game on TV recently, besides tackling and running, I noted there was also a lot of spitting.

But I think baseball could field the U.S. Olympic “spitting team” if the opportunity ever arose.

If it’s not chewing tobacco juice, then it’s sunflower seeds flying from their oral cavities.,

The sign on the wall of the old West saloon read, “If you expect to rate with our women, do not expectorate on our floor.”

Even today, in Singapore, you can be arrested and fined heavily for public spitting.

However, in China, expectoration is somewhat more socially accepted and in some cultures, spittoons are still common.

Mention spit and most people give you that “Ew!” look.

Spit, or saliva, is an extracellular fluid produced and secreted by the salivary glands in your mouth.

We have 6 major and hundreds of  minor salivary glands, most inside our cheeks at the bottom of our mouths and near our front teeth by the jawbones.

In we humans, saliva, or spit, is 99% water plus electrolytes, mucus, white blood cells, epithelial cells (where our DNA hangs out), enzymes and lysozymes.

We normally produce 2-4 pints of saliva daily, mostly in late afternoon and our saliva production is lowest at night.

Next time you bathe, consider this.

Our mouths usually produce the equivalent of two bathtubs full of saliva each year.

That’s a disgusting image in my mind right now.

It’s no wonder athletes spit so much!

Why so much saliva?

It contributes to the digestion of our food, aids our oral hygiene and helps us to chew, taste and swallow.

If our saliva did not contain other important things, by the age of 20, we’d have little stumps of teeth or no teeth at all.

There are other chemicals in that stuff we sometimes jokingly refer to as “spittle, dribble, drool, slobber or sputum” which prevent minerals in the dental hard tissue from dissolving.

Opiorphin found in saliva is a painkiller 6 times more powerful than morphine.

Saliva also facilitates our respiration as well as our digestion.

“Dry mouth” is a challenge to millions of us and there’s a group of medical professionals, known as the “salivation army (Cute!) who are working on creating better artificial salivas.

Have you ever heard the statement, “Lick their wounds”?

It’s been believed that spit aids the healing of cuts and such.

However, studies show there are no natural disinfectants in saliva.

Any benefits of licking helping healing is due to the cleaning of wounds by removing dirt and other contaminants.

However, it was “leech spit” that gave us anticoagulants.

It’s also interesting to note that when we are nervous or frightened, our saliva production drops.

That “cotton-mouth” you get before making a presentation at a meeting is real.

When we were kids playing ball, we’d always spit on our hands before grabbing the bat and we’d spit into the pockets of our ball gloves.

In Little League play, when you got an “Ouwey”, you’d rub it with a little dirt and spit.

LLamas and wild camels spit as do certain types of fish and snakes.

When our Boxers would go on wild gallops, they’d come back with rings of slobber on their snouts that we would call “hooglies”.

We use “spit” quite a bit in our human discussions.

Having trouble coming up with the response?

Looking sharp in the military meant you had a lot of “spit and polish”.

When precipitation is just starting, we like to say it’s “spitting” rain or snow.

Don’t have the proper materials to complete the project?

How about using a little “spit and bailing wire”?

If you look just like someone else does, you’re their “spitting image”.

Being close to the finish line, you’re “within spitting distance” but if your chances of winning are minimal, you might as well “spit in the wind”.

In more conservative conversations, a high-energy individual might be full of “spit and vinegar”.

When you’re really ticked about something, you’re probably “mad enough to spit nails”.

A really worthless individual “don’t amount to a bucket of spit”.

And young lovers of my generation can remember going to the drive-in to pass the night “swapping spit”.

I even have a few “spit” jokes to share.

What did Dr. Frankenstein say when is monster spat on him?

(Pretty good play on words if I must say so myself.)

Sure was windy the other day!

How windy was it?

It was so windy I spit my gum out three times.

I even found a few quotes using our old friend saliva.

Comedian Ron White said, “All I know how to do is take what’s on my mind and SPIT it out funny.”

H-L Mencken is quoted as saying, “Every normal man must be tempted, at times, to SPIT on his hands, hoist the black flag, and begin slitting throats.”

There’s also a bit of cowboy logic which says, “Be sure to taste your words before you SPIT them out.”