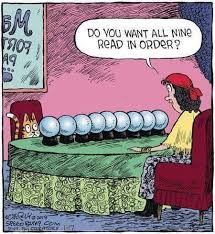 I thought about sharing New Year’s resolutions with you.

However, roughly 60% of them fail halfway through the new year.

I thought predictions for this new year might be in order.

But first, a look back on some predictions that might have come up a wee bit short of the mark.

For example, by now, recycling was expected to include turning old underwear into candy.

When Bart Simpson says, “Eat my shorts!” I don’t think that is what he was thinking.

I suppose there’s still time for this one to happen, if we rush it since “Wired” magazine ran an article in 1997 saying humans would arrive on Mars by 2020.

Didn’t I see one of those in the “Wizard of Oz?”

Time magazine printed an article in 1966 that said we’d all be so rich we wouldn’t have to work.

One futurist/computer scientist wrote that we’d be nourished by “nanobots entering our bloodstreams”, making food-eating obsolete.

In 1957, if you read Popular Mechanics magazine you would have learned that by now most roads and streets would be replaced by pneumatic tubes that we would drive to and then be “whooshed” to our destinations.

Sounds like a heavy-duty bank drive-up teller to me.

Robotic vacuums are the rage today but in 1955, folks predicted they would be nuclear-powered.

There were also predictions for the 21st century that all mail would be delivered by rockets.

In 1951, Popular Mechanic magazine stated we’d all have at least one helicopter in our garages.

Still another Popular Mechanics magazine article in 1950 said the 21st century would see us cleaning our houses by simply hosing them down since everything would be made of plastic or synthetic fibers.

Another 1950 article, this one in the Smithsonian magazine detailed how all women today would be at least 6 feet tall, wear size 11 shoes, have shoulders like wrestlers and muscles like truck drivers.

If that came true, the WNBA would look more like the NFL or NHL.

Mechanic Illustrated predicted in 1947 that we’d have “tooth banks”, similar to “blood banks” by the 21st century.

(So has the tooth fairy been hording all those incisors over the years?)

A 21st century prediction from 1939, in a British “Vogue” article said we’d all be wearing antenna hats, disposable socks and clothes with no buttons, pockets, collars or ties.

Two years earlier, Nikolai Tesla said coffee, tea and tobacco “will be no longer in vogue.”

He’s getting close with cigarettes but Starbucks is rendering the coffee/tea portion of that outlook sketchy at best.

Here’s a funny one.

Not so much the prediction but who made it.

In 1913, a New York Times article said we’d all be vegetarians by the 21st century.

The former president of the American Meat Packers Association made that forecast.

Maybe he saw the “meatless” fast-food burgers in his Magic 8 ball.

But, in 1900, Ladies Home Journal ran an article saying that by this time, the letters “C, X and Q” would be dropped from the alphabet.

Despite the poor results of some previous predictions, of which I had no involvement, I feel confident I can peer into the future and come up with some possibilities for 2020.

A tornado will strike a rural southern community and a local TV reporter will interview a guy in a t-shirt, with a pack of cigarettes rolled up in his sleeve and he’ll say, “When I heeard the sireens, I  rund outside to look.”

There will be a confirmed sighting of a shopper actually returning a shopping cart to one of those parking lot corrals.

The city of Detroit will call for putting Diana Ross on the Supreme Court.

Astronomers will discover a huge asteroid entering our solar system and they’ll ask, “Does anyone have Bruce Willis’ phone number?”

This will be the first “Lean Lien”.

As injuries continue mounting, the NFL votes to switch to flag football…until Colin Kapernick threatens to take a knee.

Someone will actually exit a fast food drive-in with a correct and complete order.

Doctors finally admit that they were just pulling our chains regarding those examination gowns.

Fruit farmers from the state of Georgia will sue the U.S. House of Representatives, claiming the ongoing “im-PEACH-ment” talk is hurting their sales.

The U.S. Supreme Court will unveil its’ new line of underwear…”Legal Briefs”.

(So that’s what they wear under those robes!)

To help deal with financial issues due to sky-rocketing players’ salaries, the NBA will start charging for “free throws”.

Weather forecasters will be implicated in a scheme to predict snow and ice storms in exchange for a kick-back from grocers when frenzied customers buy all the milk, bread and toilet paper.

Scientists will discover actual meat in a hot dog.

The PDL (Pumpkin Defense League) will call for legislation banning Jack-o-lanterns because “orange squashes have feelings, too!”

Come back next December and we’ll see how I did.