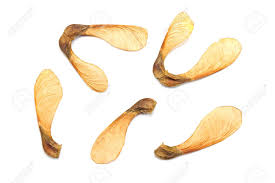 When we bought our present house more than 25 years ago, the yard had but two trees in it and they were both at the far edge of the property.

Since my wife and I both enjoy trees, we started planting saplings around the property.

Some we got in promotional packages from the Audubon Society but many were seedlings, ash and maple, that we found popping up in flower beds.

Two of the biggest trees we now have are both silver maples and this year, they dropped a mother lode of “helicopters” on us.

For the better part of a week, I thought someone was filing a new episode of “China Beach” or “Apocalypse Now” with hordes of Huey helicopters shuttling troops to a battle zone.

We dug several pounds of wet seeds out of the pool skimmer for several days and the “pinging” of them on our screened-in porch roof made it sound like a small hail storm was occurring.

I’ve never seen more of these maple seeds in my life.

The process is known as “masting”.

Normally, about every 2-7 years, maples produce large amounts of these aerodynamic wonders.

Silver maples are notorious for releasing hordes of helicopters.

They, along with Red and Norway maples can clog gutters, downspouts and storm sewers with the one or two-winged wonders.

“Samara” is defined as a specialized fruit designed to travel long distances from the parent tree.

This is part of the interesting info on these seeds.

Since most maple trees have large canopies, the seeds are designed to float away from the parent tree as far as they can, thus insuring a better chance for survival.

Why were there some many helicopters this spring?

Research indicates a bumper crop of samuras means the trees were “stressed” in some way the year before.

The tree senses its’ existence might be threatened, so it produces future trees, in the form of helicopters to propagate the species.

Now, other trees produce spinners or whirligigs but not as prodigiously as the maple clan.

Sometimes the actual leafing of maple trees can be delayed when these helicopters are numerous, like this spring.

We planted maples in our yard because we knew they were fast-growing and we were interested in having some shade as quickly as possible.

While the samuras were still clinging to the branches, I did observe a squirrel or two chowing down on some of them while negotiating the ends of branches.

Come to find out chipmunks and wild turkeys will sometimes dine on the the helicopters but that’s about it.

I understand that the tiny, green seed, about the side of a pea if you peel away the outer cover, can be tossed raw into a salad or into some stir-fry dishes.

They can sometimes be a little bitter but they’re perfectly safe to eat, albeit a  bit “labor intensive” to harvest.

I enjoy salted sunflower seeds in the shell.

I pop a handful on my mouth, and while mowing the yard, I’ll crack the seed, eat the little morsel and spit the soggy shell out.

With this year’s crop of of maple seeds being so abundant, I’m toying with the idea of harvesting some, clipping off the wings, giving them a saltwater soak and then baking them in the oven.

I’ll let you know if that works.

Can McMaples be far behind?

Now, as annoying as these helicopters can be to homeowners, they are amazing in their design and function.

The long wing balances the weight of the seed.

The wide end of the wing moves faster than the air closer to the seed which gives it lift and helps it stay aloft longer to get further away from the parent tree.

The veins on the leading edge of the wing generates just enough turbulence to help the seed cut through the air.

It gets even better.

Observed in a smoke-filled wind tunnel, maple tree helicopters form a small vortex (like a tiny tornado) atop the wing which lowers the pressure above the seed, providing even more lift.

The wing also helps the seed to stand upright between the blades of grass, giving it a better chance of penetrating the soil.

Once those samuras are pressed into the soil, the brittle wing breaks away and that allows the seed to germinate more easily.

They may be annoying when cleaning out the pool skimmer baskets or gutters, but you gotta admit, they are design miracles.

Now, you can spray a non-selective herbicide on flowering maples to cut down on the seed onslaught but that seems like too much work to me.

Now, since my maple trees are about 25 years old, we can expect airborne attacks of seeds for 100 to 400 years.

There a sugar maple in Ontario, Canada, known as “Comfort Time”. it’s been around over 500 years and is 20 feet around.

The Indiana climate is pretty good for most maples but they don’t do well in swamps, dry, sandy ridges or thin, rocky soil.

Scientists report there are more than 150 species of maple trees around the world but only one variety in the southern hemisphere.

Well, the worst of this year’s maple tree seed air drop is behind us but since I’ve learned that these outbursts are caused by stress, you may see me in the backyard whispering sweet nothings to the limbs of my trees.

If it works, I might open a “branch” office.