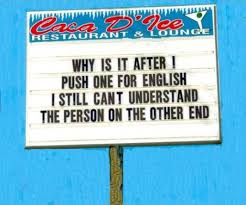 But if used properly, it can shed a lot of light into who and what we are.

The Oxford Language Dictionary says “why” can be an adverb.

(for what reason or purpose)

(with reference to a reason, on account of which; for which)

“The reason why flu shots need repeating is that the virus changes.”

It can also be an exclamation;

(used to add emphasis to a response)

The word can also be a noun;

(a reason or explanation)

“The whys and wherefores of these procedures need to be explained to the students.”

We press the elevator button or the crosswalk button multiple times.

(Are we afraid it might forget or didn’t notice us the first time?)

(It’s gotta be a trust thing!)

We press the TV remote button over and over before checking/changing the batteries.

We wear a face mask into a restaurant and then we seem to enter a ‘safe bubble’ at our booth or table and we take it off.

We always try to flip on a light switch when the power is out.

(We are creatures of habit.)

We keep complaining about elected officials but every time we vote,  we seem to

keep picking the same ones.

(I know. It’s always the “other guy’s politician” who’s the crook!)

I always try to “round up” to an even dollar amount while pumping gas.

(It’s on a credit card. I don’t even have to worry about change.)

When we’re at the gas station, we guys need to “shake the nozzle.”

(Is that a  ‘guy-thing’ bathroom reaction?)

We have to look at the tissue when we blow our noses.

We feel compelled to “sniff” a Tupperware container found in the dark recesses of the refrigerator.

We want to use our hand or fingers to see if the burner is still hot.

(Probably better than using the tongue!)

Finally,  why are there Braille instructions at my drive-up ATM?

(I hope it’s not for the guy BEHIND me!)

When I got on this “why” kick, my musical mind immediately went to song titles.

One of the most-prolific song-writing teams ever, Paul McCartney and John Lennon were obviously affected by the “Peace, Love and Rock ‘n Roll” mentality of the late 60’s when they penned, “Why Don’t We Do It In The Road” in 1968.

Although Paul actually sang it, the tune is credited to both he and John.

It’s from the infamous “White Album”.

It’s not one of their most-memorable tunes.

Neither was the 1979 classic by Frank Zappa with a question that centered on a burning topic.

(I’ll let you research that on your own.)

And, while it doesn’t totally fit the “why” title category, Dion and the Belmont’s 1959 hit “(why must I be a) Teenager in Love?” also comes to mind.

I’ve written before about my sister Jeanne once asking us, “Why is a car?”

(She also wanted to know if Pelee took garbage.)

Your “why” will keep you going on days you don’t want to.

John  Maxwell said, “Find your ‘why” and you’ll find your way.”

Friedrich Nietzsche gave us, “He who has a ‘why’ to live can bear almost any ‘how’.”

This next one resonates loudly for me these days.

“Stop asking why they keep doing it and start asking why you keep allowing it”.

(That cuts close to the bone.)

He said, “For true success, ask yourself these 4 questions;

But Ben Franklin gets into the equation with this quote;

You know, multiple “why’s” sound just like the word “wise”.

A tiny, three-lettered word that carries a LOT of weight while it answers a lot of questions.