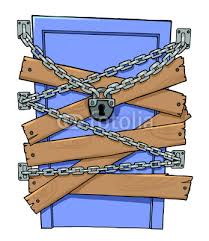 One side wants approval to build a wall on our southern border before we end the government shutdown.

The other side says, “No!” to a border wall until the government shutdown is ended.

There was a time in the “politically incorrect past” that we would call this “A Mexican stand-off”.

Ironic in some ways, isn’t it?

I found it interesting to note that our elected folks wouldn’t deal with this awful government crisis until they all wrapped up their Christmas and New Year’s vacations first.

At least none of the blow-dried talking news heads have uttered any of the popular words used to describe things today.

But give them time.

There’s a lot of talk about what to use to build a wall.

Some say a wall without ways to see through it won’t do any good.

Can’t be putting sliding glass windows in their because those locks always break down after a year or two.

Iron bars won’t  work because the Saturday morning bad guys simply loop a rope through them and pull them out with their horses.

(Saw that on the “Lone Ranger” just the other day.)

There was talk about the “Iron Curtain” and while I never actually saw an actual curtain, it did seem to do the job at keeping people seperated

Those crafty East Germans built the Berlin Wall and while it did seperate the two Germanys in Berlin, it was not a construction masterpiece.

It didn’t appear much care was given to smoothing the mortar joints.

That’s why you’ll never see it on any of the myriad “home fix-up” shows on the tube.

There was talk of a “Bamboo Curtain” in southeast Asia in the 60’s but you just simply roll them up when the weather goes sour.

Now some are suggesting we use steel panels of some sort.

Might be just what the American steel industry needs.

But won’t steel need some maintenance unless it’s stainless steel?

Then the cost factor would be significant.

We need some other options to control the border.

I might suggest a series of those mirrored houses that we used to see at the county fairs.

You just line those up at the border and folks walk inside.

People get so frustrated trying to find their way out that when they do back-track, they say, “The heck with it” and go back home to do the paperwork and come here legally.

(I never learned until many years later that if you looked down on the floor, you could follow the footprints to freedom.)

But I also used to get sidetracked by Chinese finger traps.

Also known as Chinese finger puzzles, Chinese thumb cuffs and Chinese handcuffs, they are small cylinders, woven from bamboo that were credited to the 6th century BC Chinese philosopher Lao Tzu.

A Chinese finger trap is also a commom metaphor for a problem that can be overcome by relaxing.

Maybe if we all did that, we could re-open the government and build a wall.

What about uilding a wall with all the doors major retailers install but always leave locked?

It would solve the visibility issue and it would help ease the frustrations of American consumers trying to buy up all the Chinese finger traps.

Not to mention all the spilled drinks when you walk into a locked door.

Greasy face smudges on those egresses.

Let’s take a concept from American theme parks to deal with this issue.

Offer a “Fast Pass” to those who will enter our nation legally and make all the others wind through the seeemingly endless maze of chains and/or velvet ropes that seem to lead nowhere.

Especially in the hot sun or pouring rain.

Isn’t that sort of what legal immigration is like?

Sounds like going to the BMV to transfer an auto title.

I think we need a national “Border Wall Lottery”.

We Americans love to gamble.

We’ll pay for it in weeks.

Remember how the state lotteries were going to pave all our roads or give us modern schools with well-paid educators?

You mean that didn’t happen?

Why don’t we just buy some of those Acme Products crossing gates the Road Runner always seem to find when that pesky Wile E. Coyote was on his tail?

You know that no matter how clear the tracks looked, the minute ole Wile E. stepped across, he’d get clobbered by s  high-speed passenger train.