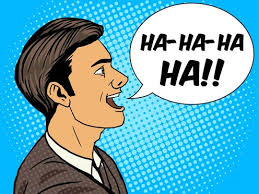 As we continue to socially isolate and maintain our distance, or “hunker down” as we say in Indiana, I am reminded that April is “National Humor Month”.

There is some irony in that this year.

And yet, as important as staying apart and socially distancing is important, I think we also need to laugh.

One of my favorite quotes is from E.B. White, the writer and contributing editor for New Yorker Magazine.

I believe we first begin to heal and recover from a situation when we laugh.

Over the years, I’ve been accused of sharing humorous thoughts and opinions on issues and matters while the “wounds” were still fresh.

When I’d get that head shake and smirk, I’d respond, “Too early for that?”

But, I’m betting my line was repeated fairly quickly to someone else.

For the most part, I think a sense of humor and common sense are in somewhat short supply.

Isn’t that a great thought?

Comic Sid Caesar is credited with, “Comedy has to be based on truth. You take the truth and you put a little curlicue at the end.”

Good comics often get under-valued because their best work makes us laugh.

How can that be great if we’re laughing at it?

But I think a good comic is every bit as talented as a great surgeon, a scientist or an inventor.

The English poet, Samuel Taylor Coleridge said, “People of humor are always, in some degree, people of genius.”

In times like these, humor and laughter is good for us.

Author Grenville Kleiser stated, “Good humor is a tonic for mind and body. It is the best antidote for anxiety and depression. It is a business asset. It attracts and keeps friends. It lightens human burdens. It is a direct route to serenity and contentment.”

American journalist Christoper Morley thought, “Humor is perhaps a sense of intellectual perspective; an awareness that some things are really important, others not and that the two kinds are most-oddly jumbled in everyday affairs.”

“A tersely-phrased statement of a truth on an opinion; an adage.”

“Humor does not rescue us from unhappiness but enables us to move back from it a little.”

Humorist Allen Klein had a similar thought when he said, “Humor does not diminish the pain; it makes the space around it get bigger.”

Humor gives us a little “breathing room” from the situation.

How important is humor in “trying times?’

She stated, “He who laughs, lasts.”

19th century American Congregationalist clergyman Henry Ward Beecher believed “a person without a sense of humor is like a wagon without springs. It’s jolted by every pebble on the road.”

Laughing and humor seem to help us cope.

The comments of author William Arthur Ward seem on the mark for these times.

He said, “A well-developed sense of humor is the pole that adds balance to your steps as you walk the tightrope of life.”

There are times that a sense of humor seems to tick off or bother those “in charge” but American essayist Agnes Repplier stated, “Humor distorts nothing and only false gods are laughed off their earthly pedestals.”

Jean-Baptists Poquelin, whose stage name was Moliere, said way-back in the 17th century that “the duty of comedy is to correct men by amusing them.”

Did you ever read  James Thurber’s “The Life and Times of Walter Mitty?”

He said, “Humor is a serious thing. I like to think of it as one of our greatest,  earliest natural resources, which must be preserved at all costs.”

If this isolation is getting to you, laugh.

American poet Langston Hughes said, “Like a welcome summer rain, humor may suddenly cleanse and cool the earth, the air…and you.”

Danish comedian and pianist Victor Borge said, “Humor is something that thrives between man’s aspirations and his limitations. There is more logic in humor than in anything else. Because, you see, humor is truth.”

Hugh Sidey, the American journalist says this; “A sense of humor…is needed armor. Joy in one’s heart and some laughter on one’s lips is a sign that the person down deep has a pretty good grasp of life.”

Bob Hope has a good grasp on the matter.

He said, “A sense of humor is good for you. Have you ever heard of a laughing hyena with heartburn?”

I hope my thoughts have eased your mind a bit and that something will cause you to chuckle as you wash your hands…again!

But stand up comic Bill Hicks reminds us, “It’s always funny until someone gets hurt. Then it’s just hilarious.”